The EPFA is a charity that was formed by a group of parents in Escrick for the maintenance and improvement of the playing fields. On its formation it created the existing play area on ground kindly provided by The Escrick Park Estate for a peppercorn rent. The EPFA is run by a committee of volunteers who report to The Parish Council. The volunteers raise money, undertake safety checks, clear rubbish and carry out maintenance in order to ensure the village has, and will continue to have, an attractive, safe and stimulating play area for the children.

The committee meet on the second Monday of alternate months at 8.30pm in The Village Club and anyone who wishes to join us is most welcome. The AGM is held on the second Monday of November at the same time. The main fundraising event is The Escrick 10K Race and on average we raise £4-5000 per annum. These funds are then used to maintain the area and to build reserves for the replacement of equipment when it reaches end of life.

In 2012 we were able to add a basket swing, in 2013 we have added a zip wire and a roundabout and in 2014 we added a table tennis table. Football nets have been put up to encourage use of the goals. The woodland area has been cleared, thinned and a new path dug. The focus is now on growing reserves for future replacements of the original equipment which will be reaching end-of-life over the coming years. (There is about £80,000 of equipment in place with a typical life expectancy of 20 years - so an average of £4000 per year to replace)

Fundraising activities have included a pub games night in The Black Bull, The York Dragon Boat Race and The Escrick 10k.

Simon Hunt is the chair and can be contacted on playing.fields@escrick.org 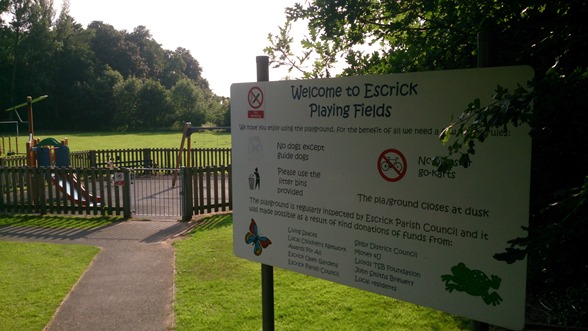